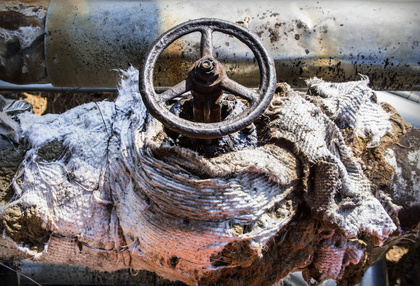 It’s cheap, available in enormous quantities in the ground and it’s fireproof. Items made with it won’t burn. What’s not to like? For thousands of years, that was the official attitude towards asbestos in many countries throughout the world. Although it always seemed apparent that asbestos disease went hand-in-hand with asbestos mining and asbestos use, many people did not make the connection. Or they preferred not to make the connection between asbestos and disease until relatively recently. It was just too useful to let an inconvenience such as the illness and death of one’s slaves, employees or customers stand in the way. So its an inter-connected saga of asbestos and asbestos disease – a saga that begins in the ancient world and sadly continues even to this day.

Asbestos is a versatile, durable, inflammable material that has been used in products, industry and construction for thousands of years.  But asbestos is also highly toxic and can cause fatal diseases, predominantly a cancer called mesothelioma, in people who are exposed to it.

Asbestos is a naturally occurring mineral that can be dug out of the earth’s surface. Russia is one of the largest suppliers of asbestos today.  Italy, England, Canada and the U.S. all engaged in asbestos mining for much of the 20th century.  After asbestos is extracted from the earth, it is cleaned, processed and spun into light fluffy fibers.  Even though these fibers are often mixed with a binding agent like cement, when asbestos dust breaks loose from these asbestos fibers it can fatally damage the lungs or other organs of anyone who inhales it. This is how asbestos disease gets started.

Neolithic pottery shards containing asbestos that are 4,500 years old have been found in Finland, central Russia, Norway and Sweden.   Sources from fifth century B.C. China and India identify the use of asbestos as a fireproof material.

In the West, it is first mentioned by the ancient Greeks. Some say that’s why it is named “asbestos” for an ancient Greek term for “inextinguishable.” Other attribute the name to the Roman philosopher and naturalist Pliny the Elder. But many historians attest that the Greeks around 300 B.C. and then the Romans not only noted that asbestos was resistant to fire and heat but that it also caused asbestos disease.

How the Industrial Revolution Led To Asbestos Disease Discovery

When the Industrial Revolution roared to life in the 1800s with the invention of engines and machinery, it also breathed new life into asbestos – and consequently caused a rise in asbestos diseases.

Steam trains, steam ships and factories came into being. As the commercial use of coal and steam powered machinery skyrocketed, a way was needed to control the heat generated by the machines so they didn’t burn nearby workers.  Asbestos served as an insulator for all the steam pipes, turbines and engines that powered the Industrial Revolution.

By the end of the 19th century, asbestos was also being used in concrete, bricks, pipe coverings, fireplaces gaskets, ceiling insulation, flooring, roofing, and wall materials.

This sudden uptick in demand for asbestos prompted a new wave in asbestos mining. Mines opened in Canada in 1879 followed by mines in Russia, Australia, South Africa and other parts of the world.  By the early 1900s, doctors started reporting asbestos disease which they described as “lung sickness” and “pulmonary fibrosis” in their patients who had worked with asbestos.

Thus, began nearly a century of cover-up and denial by companies responsible for sickening their workers because those businesses did not want to be held responsible or pay the workers’ families for the deaths the asbestos disease caused.

Asbestos disease and death soon became officially linked with working with asbestos. In 1900, a postmortem examination of a young asbestos factory worker who had died from pulmonary fibrosis revealed asbestos particles in the victim’s lungs. Asbestos was officially listed as a harmful industrial substance in 1902 by Adelaide Anderson, the Inspector of Factories in Britain, as noted by Wikipedia, but it seems to have made little difference.

In 1924, Nellie Kershaw, a 33-year-old wife and mother who worked as an asbestos spinner died of asbestos disease. She knew as she was dying and her doctor concurred that her work had caused her fatal illness. She pleaded with her employers, Turner Brothers Asbestos, to compensate her for the asbestos disease they had caused.  They refused.  And they instructed their insurance company to “repudiate the claim” as it would be “exceedingly dangerous” to accept “any liability whatever in such a case.”

Dr. William Edmund Cooke, a pathologist and bacteriologist, called in during the autopsy to examine Nellie’s lungs, testified that he saw visible “particles of mineral matter … of various shapes, but the large majority have sharp angles.”  He concluded that asbestos had caused her illness and death. What’s more, he published the first known medical paper on asbestos disease.

His paper published in the prestigious British Medical Journal in 1927 prompted parliament to order its own report. The resulting 1930 report Occurrence of Pulmonary Fibrosis & Other Pulmonary Affections in Asbestos Workers, was the first health study of asbestos workers. It established that inhaling asbestos dust without a doubt linked to the development of fatal asbestos disease. The results of the report led to Parliament passing the first Asbestos Industry Regulations in 1931.  But the need for the rapid production of ships, planes and weapons needed to fight World War II overwhelmed all other considerations.  Asbestos often was used in warships and freighters, mostly manufactured in the United States.

Asbestos Disease and the Fight for Justice

Although much was known by the 1930s and 1940s about the connection between asbestos and the development of asbestos disease including cancer, asbestos manufacturers and their insurance companies succeeded in suppressing information about this. They ignored the danger for the sake of profits, much like the tobacco industry.

Between the 1940s and 1970s, asbestos was used in many products in the U.S. both in the home and for industrial use. Because of its fiber strength and heat resistance, asbestos was used in a variety of construction materials for insulation and as a fire retardant in buildings throughout the U.S. including schools, hospitals, apartment buildings and factories. Asbestos was a part of building materials – roofing shingles, ceiling and floor tiles, paper products, and asbestos cement products, friction products including automobile clutch, brake, and transmission parts, heat-resistant fabrics, packaging, gaskets, and coatings for boilers and other machinery involving the use of high heat. It also found its way into people’s homes as an insulating material in hair dryers, irons and ironing board covers, toasters, coffee pots, and many other products.

In the late 1970s, court cases filed on behalf of workers sickened by asbestos exposure revealed documents proving that asbestos industry officials had known about the lethal health risks of asbestos exposure for many decades but had concealed that information from the public. Steven Kazan, the founder of Kazan Law which supports Mesothelioma Circle, was one of those first lawyers who won justice for those who were willfully exposed to asbestos by companies well aware of the dangers.

The Occupational Safety and Health Administration (OSHA) states, “There is no ‘safe’ level of asbestos exposure for any type of asbestos fiber.  Every occupational exposure to asbestos contributes to the risk of getting an asbestos disease.” Here are a few final facts: