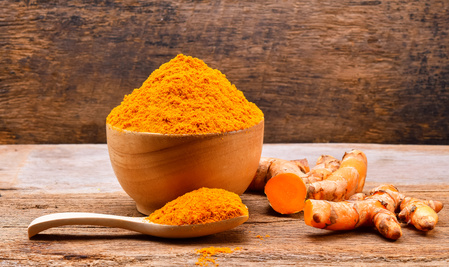 Turmeric Crosses Over from Food to Pharmacology For Mesothelioma Treatment

Most of us think of turmeric in its culinary role.  It is a well-liked yellow spice from Asia used widely in cooking, particularly in India and Nepal. In that part of the world, it has been used for thousands of years in regional cuisine. It is what gives curry powder its yellow color and its flavorful oomph. Turmeric is also added commercially to some foods and beverages to accentuate a yellow color in a natural way.

In recent decades, people interested in healthy eating to prevent and battle illness and chronic conditions have highlighted turmeric as a beneficial herb to include in one’s diet.  In addition to using generous amounts of turmeric in stews and soups, there are now also herbal teas that contain turmeric sometimes in combination with other herbs and spices like ginger.

The good news is that the glowing accounts of turmeric’s healthful properties put this spice on medical science’s radar. The bad news is that after a lot of experimenting, the scientists learned that it is not so easy for the body to access the  benefits of turmeric.

Turmeric’s active ingredient is called curcumin.  This is the compound that is associated with turmeric’s reported ability to fight cancer.  It has powerful anti-inflammatory effects and is a very strong antioxidant. But the curcumin content of turmeric is not very high. In fact, it is only around three percent, by weight. Also it is not very bioavailable; i.e. not that easily absorbed into the bloodstream. So to get the full reported benefits of curcumin, it would take amounts far greater than what could be consumed in food.  The amounts are considered pharmacological not nutritional.

That is why clinical studies on turmeric for mesothelioma treatment and other types of cancer and disease treatment use turmeric extracts that are highly concentrated and standardized to include large amounts of curcumin.

A new study from Italy and published in the international cancer journal Oncotarget explored using high doses of the turmeric compound curcumin as a cell-based mesothelioma treatment.  Italy is a country that once had a very active asbestos mining industry.  Consequently, Italy is very involved in mesothelioma research because they have a high number of cases of this lethal illness.

The researchers then tested curcumin’s effects against mesothelioma in laboratory mice. Researchers found that the treatment curbed tumor growth and that the mice given the curcumin mesothelioma treatment survived longer than mice who received a placebo treatment.

Getting the curcumin directly into the tumor increased the survival of the mice in the experiment and reduced their odds of developing more tumors. “Our findings may have important implications for the design of MM (malignant mesothelioma) treatment using CUR (curcumin),” the researchers state in their published report. [1]

The authors stressed that directly inserting curcumin into the tumor increases its effectiveness and improves its likelihood for being an effective mesothelioma treatment.

This latest study from Italy adds support to an earlier study finding positive effects for the turmeric compound curcumin in mesothelioma treatment.

In this study, researchers working together from Case Western Reserve University in Ohio and Georg-Speyer-Haus in Frankfurt, Germany tested tissue samples from mesothelioma patients in different parts of the U.S. Their findings were published in the journal Clinical Cancer Research.

The progression of mesothelioma, and several other cancers, is triggered by a protein called STAT3 (signal transducer and activator of transcription 3). It binds to cell DNA and wreaks havoc. However, STAT3 has an enemy, known as PIAS3, which can block the ability of STAT3 to promote this terrible cancer growth. Curcumin was found to raise the levels of helpful PIAS3 in the body.  This higher level of helpful PIAS3 made it easier to stop the harmful action of STAT3.

Researchers found that mesothelioma patients with high levels of PIAS3 had a 44% less chance of dying from the disease during the study period. They urged that forms of curcumin be developed to increase its absorption into the cells.

Both these studies add to the growing understanding of how an active compound in the spice turmeric can offer important cancer-fighting properties that appear to be effective for mesothelioma treatment. But the compound curcumin needs to be in the form of a concentrated extract that is easily absorbed by the body and put in direct contact with cancer cells in the tumor to be effective.