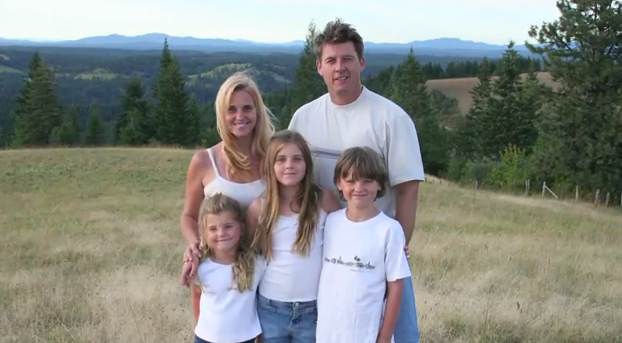 Most people are in their 60s or older when they get the bad news of a mesothelioma diagnosis. Timothy Vest and his wife were shocked to learn that they would be joining the ranks of mesothelioma families when he was just 44 years old. He had three small children and a promising career as a pilot with a major airline. He thought he had his whole life ahead of him.

Mesothelioma families grow strong in adversity, however, and the Vest family’s story is more than the tragedy of asbestos exposure and mesothelioma. It’s also a story of triumph, joy, and service. It’s a story whose final chapter has yet to be written.

A Young Man Who Wanted to Soar

Ever since Timothy Vest was a little boy, he was fascinated with airplanes and flight. His father was a pilot for World Airways, which had its base at the Oakland Airport in the 1970s. In 1973, the airline moved into a newly-built hangar, one of the biggest in the world at that time. Young Timothy toured the site a couple of times during construction; after the hangar opened, he became a regular visitor. On weekends, he watched the mechanics repair the big airplanes that rolled in and out of that hangar.

By his teens, Timothy Vest knew what he wanted to do with his life. At the age of 16 he got his pilot’s license. His first pilot job was flying cargo planes for the shipping company Emery Worldwide.

Working for Emery throughout the 1990s, he had the opportunity to fly all over the world. President George H.W. Bush honored Timothy with the Civilian Air Medal for his work to deliver support for Operation Desert Storm in the early 1990s. During his time with Emery, he also piloted relief missions to war-torn Darfur, Sudan, and to Chernobyl, Ukraine, after the nuclear reactor meltdown.

In 2001, Timothy started flying for passenger airline JetBlue. It seemed like the only direction for the Vest family was up.

Then, in 2009, Timothy heard the news that changed the course of his life: a mesothelioma diagnosis at the young age of 44. The Vests were now among the thousands of mesothelioma families.

It wasn’t until after his mesothelioma diagnosis that Timothy Vest and his father found out the truth about the hangar at the Oakland Airport where both men had spent so much time decades before. When Timothy visited the hangar under construction, he was exposed to asbestos in the fireproof material that the construction crew sprayed into the walls. Later, he breathed asbestos dust from airplane parts that contained or were coated with asbestos and from the epoxies used to repair the airplanes. Almost every space in that airplane hangar was infiltrated by toxic asbestos. Even the drywall in the office spaces contained asbestos.

The saddest part of Timothy’s story is that it was entirely preventable. By the early 1960s, enough mesothelioma cases had come to light that the connection between asbestos exposure and disease, including this deadly cancer, was well understood.

Corporations had known for many years that asbestos dust was toxic, yet they continued to use it in their products. Asbestos was a cheap and convenient material that added fire-proofing and made products stronger. Manufacturers valued convenience over the lives of mesothelioma families.

Timothy Vest happily spent many innocent days of his childhood at the Oakland Airport. He dreamed of the day when he would sit in the cockpit of one of the big aircraft, just like his father. His father thought he was providing enrichment for his son by introducing him to his beloved world of aviation. He didn’t know that his family was becoming one of the mesothelioma families.

The Journey of Mesothelioma Families

Timothy Vest’s mesothelioma diagnosis came at an unusually early age. Because mesothelioma takes many years and decades to form after someone is exposed to asbestos, most mesothelioma patients are in their 60s, 70s and 80s.

Asbestos is a naturally-occurring mineral that forms into threads or fibers. These fibers can break down into tiny, sharp spikes. When inhaled, the pointed ends of these microscopic bits of asbestos can lodge in the lungs. The most likely path for asbestos exposure is through inhaling asbestos dust, most often at a workplace where asbestos materials were used. Because of this, the most common form of mesothelioma is pleural, which affects the lining around the lungs.

Mesothelioma families like the Vests begin a journey after their mesothelioma diagnosis. Because mesothelioma has symptoms that overlap with other diseases, including lung cancer, it can be hard to diagnose. Most mesothelioma patients need a biopsy to confirm that their shortness of breath, persistent cough, chest pain, low fever, or fluid in the lungs is mesothelioma.

Mesothelioma treatment depends on the stage at which the disease is caught. Timothy Vest was lucky – if any mesothelioma patient can truly be called lucky. He caught the disease at an early stage, and surgery was able to totally remove the tumor. Pleural mesothelioma surgery also usually removes the pleura or the lining around the lung, but his surgery was more limited.

After mesothelioma surgery, Timothy underwent chemotherapy to knock out any remaining cancer cells that the surgeon couldn’t remove. Since his treatment, his mesothelioma has not come back.

Most mesothelioma patients pass away within two years of diagnosis, leaving behind shattered mesothelioma families. Timothy’s young age and good health, as well as his early diagnosis, have helped him kick the disease so far.

If you were exposed to asbestos at some time in your life, that doesn’t mean you will develop mesothelioma, but it does mean you are at risk. Be aware of mesothelioma symptoms and let your doctor know about your history with asbestos. An early diagnosis will improve your prognosis.

These days, Timothy Vest does everything he can to stay healthy because he knows that will increase his chances of becoming a long-term mesothelioma survivor. But that’s not all he’s doing.

Like so many other mesothelioma families, Timothy and his loved ones chose to fight back against the corporations whose negligence caused his illness. With the help of Kazan Law, he filed suit in 2009 and was able to settle with the manufacturers and the owner of the hangar.

Since his out of court win, Timothy has donated to Stanford University Medical Center, where he had his surgey, to help fund mesothelioma research so that mesothelioma families can have more hope for the future. He also volunteers to support other cancer patients.

Most importantly, he spends time with his wife and children. Mesothelioma families know that every day they have together is precious and he doesn’t want a single one to go to waste.