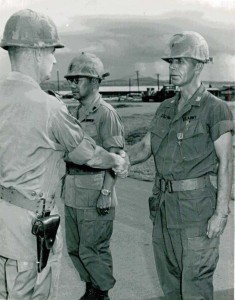 No one could say that Bud Stillman’s life was boring. His military service encompassed two wars and his pursuit of the woman he loved is a romantic story that spans continents. He even wrote a memoir about his adventurous life. But when Bud was diagnosed with mesothelioma in July of 2010, he and his wife joined the ranks of mesothelioma families.

Bud Stillman had one more chapter to write after his mesothelioma diagnosis. It was one that would help other mesothelioma families as well as his own.

A Fighting Start to Life

The man born as Haskell Mullen Stillman was Junior in his family and simply “Bud” to friends and colleagues throughout most of his life. Born in 1929 just months before the stock market crash, Bud knew what it was to face hardship and to go hungry as a child. He watched his father take any job that would help him feed his wife and two children. In his memoir, He Bleeds Olive Drab, Bud even tells the story of his father, in desperation, stealing groceries at gunpoint. The grocer didn’t report him, and Bud’s father returned, years later, and paid for those groceries with interest.

Bud joined the United States Army in 1948, when he was 19 years old. His military service was maintaining and repairing military vehicles. He continued this career after he left the army, working as a mechanic and maintenance supervisor for a truck rental company.

Bud Stillman knew how to make an engine purr. What he didn’t know was that, while he did the work he was best at, the asbestos linings of the brakes he worked on sent fine asbestos dust into the air. Only many years later would he discover that the thing he loved doing would slowly kill him.

Bud Stillman served in the army for 21 years, rising to the rank of Chief Warrant Officer before he retired. He served in the wars in Korea and Vietnam and was stationed at military bases around the world. He was awarded numerous medals for his service to his country. After he left the service, he became the Post Commander for the Veterans of Foreign Wars (VFW) in Sunnyvale, California, where he settled with his wife.

He couldn’t get Kay out of his mind. Although he had done his duty to his country and could have left the military, Bud extended his service to the army so he could get back to Japan to meet up again with the love of his life.

The second time he met up with Kay, Bud knew what he had to do: he asked her to be his wife. They were married in Japan in 1954 and Kay traveled with Bud around the world for the next 16 years, going wherever his military service took him.

When he returned to civilian life in 1970, Bud and Kay settled in a quiet Bay Area suburb that would later become a hub of bustling Silicon Valley. Forty years later, Bud and Kay were living a quiet life in their Sunnyvale home. Bud had retired, but took the time to write his memoirs, with help from his children. He loved to fish and went salt water fishing every week.

After 46 years of marriage, Bud still woke up every day thrilled to have Kay by his side. The couple looked forward to many more years enjoying their retirement and spending time with their grandchildren and (someday soon) great grandchildren.

The Stillmans couldn’t see the shadow that loomed over their lives. They didn’t know they would soon become one of many mesothelioma families.

No one had ever told Bud that the brakes of the trucks he had repaired while he was in the army and in his civilian career were lined with asbestos. He didn’t know that invisible particles of asbestos dust permeated the air in the shops where he had worked.

Bud only learned of this grave danger when he was diagnosed with mesothelioma in July 2010. But Bud Stillman was never one to shy away from a challenge. He decided to fight for justice. Within a month of his diagnosis, he contracted with Kazan Law to file suit against the corporations that manufactured the asbestos-lined brakes for the trucks he repaired.

A year after Bud’s diagnosis, his trial began. Most of the defendants quickly settled as they saw the strength of the evidence against them. Only Eaton Corporation, which knew the dangers of asbestos but continued to use this toxic mineral to make brake linings, hung on. By the time the jury went to deliberations, Eaton realized it had lost and reached a settlement with the Stillmans.

The legal victory was bittersweet for Bud and Kay. The financial settlements meant that Kay can live the rest of her life without want or worry. But she will also have to live her life without Bud. Haskell “Bud” Stillman passed away on July 15, 2012, at age 83, after a two-year battle with mesothelioma.

The Legacy of Mesothelioma Families

Bud Stillman’s life was eventful and happy until the day that he and his loved ones joined the ranks of mesothelioma families. He left behind his and Kay’s two children and three grandchildren. The youngest addition to the Stillman lineage, Bud’s great granddaughter, Addison Morrow, was born less than two months before his death.

Addison won’t get the chance to know her great grandfather, a colorful and lively character. But she may hear the stories about his life: how he traveled across the globe and went to war to find his one true love, how he served his country proudly for more than two decades, and how, when he was faced with the last and biggest fight of his life, Bud Stillman took on that challenge with courage and honor. Mesothelioma families like Bud’s have a lot to be proud of.