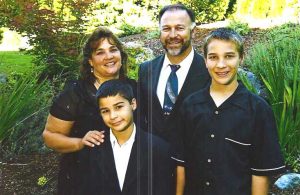 Randy and Debbie Clemmons and their sons Brady and Garrett lived just across the bay from San Francisco. They had been married 24 years when Randy was diagnosed with mesothelioma. He had just turned 51. Randy was the morning drive host at a Christian radio station, a dream job he pursued as his second career. After his diagnosis, He openly shared the ups and downs of his treatments on the air with listeners. His favorite part his job was his Sunday music show called, “Spirit of Praise,” where he would showcase some of the top Christian music artists and praise songs. Randy also hosted the Christian Fellowship days with the San Francisco Giants and Oakland A’s, and many local concerts and events.

The Clemmons were very involved with their church community. Randy helped in the children’s ministries on Sunday mornings. He was also a big part of a men’s softball team. For over ten years, he managed a group from church, a team of guys he led to victory in countless tournaments and leagues. Many times they would return from their victories and throw big parties.

Randy’s father, Johney, died from an asbestos lung disease when Randy was 26. Much of Randy’s asbestos exposure came when he was a child and young man living in his parents’ home, which was contaminated by the asbestos fibers Johney brought home in his hair and on his clothes without having any idea of the dangers they presented to his family. Johney first worked with asbestos starting in 1947 and the house was well contaminated by the time Randy was born in 1955, and it stayed that way until he grew up and left the family home.

Randy first went to the emergency feeling fullness in his chest. Doctors drained fluid from his lungs twice before tests from the fluid led to the diagnosis of mesothelioma three weeks after his first emergency visit.

At the time of Randy’s diagnosis, there wasn’t a lot of personal information on mesothelioma patients available, so Debbie decided to keep a journal of the daily grappling with mesothelioma. She kept track of their journey for thirty two months, with the goal to help other mesothelioma patients when they become blindsided by their diagnosis. She hung on to her faith as the journey took a toll on her strength, energy and mental health.

Not typically known for her writing skills, she decided to forge forward in writing In His Grace: Grappling with Mesothelioma, in hopes that this book will aid mesothelioma patients and also other people facing terminal illness. The book is available on Amazon.